I mentioned the other day that other witch trials took place at Lancaster in August 1612. One of these was the trial of Margaret Pearson, called the ‘Witch of Padiham’. Padiham abuts Altham, where Nicholas Bannister was Justice of the Peace, the same Nicholas Bannister that questioned the Devices with Roger Nowell at Fence. I cannot help but feel that Bannister was cajoled by Nowell to bring some witches of his own to trial. If so, it was an ill-considered move. Margaret Pearson had already been twice tried for witchcraft – once for murder and once for bewitching a neighbour, and she had been acquitted on both occasions.

This time she was charged with killing a mare belonging to a Mr Dodgson of Padiham. Chattox was brought into the court to give evidence, and said that Pearson was a witch, who had a cloven-footed spirit, which had climbed through a loop-hole in the roof of Dodgson’s barn with Pearson, and the pair had sat upon the mare until it had died. Chattox continued that Pearson had told her she had bewitched to death one Childer’s wife and child, adding that “… the said Pearson’s wife is as ill as she.” Then evidence from a Jennet Booth was presented, given to Bannister on August 9th, which told how Booth had gone to Pearson’s house to card wool, and, having a child with her, had asked for some milk, which she had put in a pan on the fire to warm.

As she took the pan from the fire “…there came a Toade, or a thing very like a Toade,” which Pearson lifted up with tongs and put outside. Now, in my eyes, tossing the local creepy-crawlies out of your kitchen is hardly evidence of witchcraft. Potts adds that divers other witnesses then gave evidence in court, but he does not report the content, so it probably wasn’t as damning as wildlife making a bolt for it from under the stove. Yet, on the back of it, Margaret Pearson was found guilty of witchcraft, but as her offence had been against goods, rather than people, her sentence was,

“You shall stand vpon the Pillarie in open Market, at Clitheroe, Paddiham, Whalley, and Lancaster, foure Market dayes, with a Paper vpon your head, in great Letters, declaring your offence, and there you shall confesse your offence, and after to remaine in Prison for one yeare without Baile, and after to be bound with good Sureties, to be of the good behauiour.”

The distances between the places may seem trivial to us, but Lancaster is a good twenty miles of wild, open moorland from Clitheroe, Padiham or Whalley, and to have to travel between them four times in a year, and then to spend a year in gaol, would have been quite a sentence. Added to that is the physical punishment of actually standing locked in the pillory, for six hours at a time, with head and hands secured by boards, out in all weathers; if one was lucky, you would be laughed at, humiliated, and maybe pelted with rotten fruit and vegetables - if you were unlucky, a well-aimed stone to the head might kill or maim you. The Pillory was used a public deterrent, as were the Stocks, (the pillory secured the head and/or hands, the stocks secured the feet), erected in the Market Square of each town or village, as a warning to all, even when empty. Public punishments, including public executions, were used in the past as an example to the people of what transgressors could expect. How effective this approach was is open to debate. 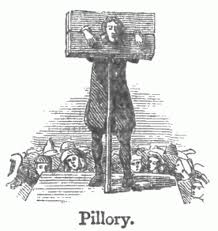 There was one other individual also tried at the Assizes (I will look at the Salmesbury witches separately), one Isobel Roby (or Robey), from Windle, near St Helens. It seems odd that someone from so far south in the county would be brought to Lancaster, but brought she was. Potts laments that in Lancashire there are as many witches as there are ‘Seminaries, Iesuites, and Papists,’ hypothetically asking, “What hath the Kings Maiestie written and published in his Dæmonologie?” the only time the King’s book is directly referred to by name, but a nice reminder that he, and the bench, were aware of its contents.

The evidence against Roby is sparse, and sounds more like squabbling between in-laws and neighbours, but people complained that they had felt weakened after quarrelling with her, and so she must have bewitched them. Under the laws revised by King James in 1604, the death penalty was proscribed for anyone who caused by witchcraft another to be ‘… killed, destroyed, wasted, pined or lamed in his body,’ and thus Isobel Roby was also found guilty and sentenced to death.