On this Harvest Moon


August 1st, in the old pagan days, was Lughnasadh (pronounced Loo-nă-să) or Lammas. It was the celebration day for the first fruits of the harvest, especially the grain harvest, and after the introduction of the Christian faith into Britain the tradition was continued with loaves of bread being offered in churches. 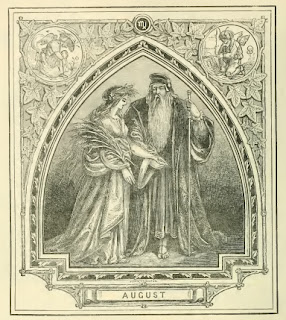 The hlæf-mass – the loaf-mass – became Lammas, just as hlæfdí – loaf-kneader – became ‘lady’ (dí is cognate with ‘dough’), and hlæfweard – loaf-ward – became ‘lord’ (weard became ‘ward’ – a guardian, as in warden); mass meant festival or feastday, as in Michaelmas, Candlemas or Christmas – it has nothing to do with the Catholic Rite of the Mass, which takes its name from the final Latin words of the liturgy Ite, missa est – ‘Go, it is the dismissal’ (i.e. Go, the Mass is ended).

In a back-formation, it became the custom at York to bring a lamb to the Minster on Lammas Day, but this is because the original meaning had been forgotten, and the homophone inspired the deed, (and lambs born in Spring aren’t really lambs by the time August comes around).

Another name of the day is the ‘Gule of August’ – Gule comes from Old English gwyl, meaning a festival, but the ultimate etymology of the term is lost, although Yule is still used as a synonym for Christmas. Cormac, Archbishop of Cashel in the tenth century, in his Irish Glossary, tells that, "… in his time, four great fires were lighted up on the four great festivals of the Druids; viz. in February, May, August, and November." The last of these lingers on in the guise of the Bonfire, shifted on a few days but still celebrated. Lammas Day was traditionally when farm labourers were hired at country fairs – a man looking for work could be identified by his having a straw or green stem in his mouth. 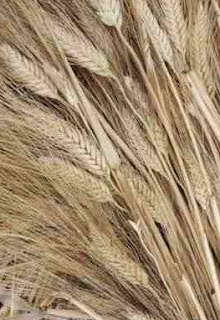 A popular custom in the past was the presentation of Glove Silver, when gifts of money were given to servants to buy gloves. In Exeter, an enormous stuffed glove was mounted on a long pole, decorated with flowers and ribbons, and paraded through the town, before being displayed at the fair.

In the Catholic Church, a penny ‘for the Pope’ was donated by every family, called ‘Peter’s Pence’, and was said to come from a legend regarding the Roman Tribune Quirinus, who had a daughter suffering from a throat disorder. The Pope told him to take the girl to kiss the chains in which St Peter had been shackled, whereby she was cured. The feastday of St Peter ad Vincula (St Peter in Chains) was celebrated on the day but the link between vincula and Latin gula (‘throat’) and Gule of August, made by some, is far too contrived. (By the bye, my infant and junior school was attached to the Church of St Peter in Chains, Blackburn).