A sizar is a student of Trinity College, Dublin or Cambridge University who receives assistance (meals, reduced fees, lodgings etc.) often in return for some sort of work (in the kitchens, for example). John Darrel had been a sizar at Queens’ College, Cambridge, where he read for a BA, before studying Law in London. He took to preaching and the Puritan faith, and in 1586, he exorcised Katherine Wright of a devil, and then on her repossession, a further eight devils.

Darrel wrote a book about the case, and in 1596 he exorcised one Thomas Darling, called the Boy of Burton, a fourteen year old, who convulsed, vomited and saw green angels and green cats. Another book was written, by Jesse Bee, a saddler from Burton, and Darrel’s fame as an exorcist began to spread. This is why Nicholas Starkie sought him out and brought him to Cleworth. After exorcising Starkie’s household, Darrel wrote another book, as did others, and in 1597 he had moved to Nottingham, where he dispossessed William Somers, a twenty-year-old musician’s apprentice.

Somers would froth at the mouth, perform obscene acts, vomit copiously, and a lump the size of an egg would move strangely about his body. Crowds formed to watch the rituals, as Darrel cast out the devils, and then they remained to hear his lurid sermons. His fame, and his audience, grew and grew. Then Darrel began to use Somers to identify witches, and several women were imprisoned on charges of sorcery. Unfortunately (for Darrel), one of these was a relative of an Alderman of The City, who, with his civic friends, intervened, having Somers placed in an institution and instigated proceedings to have Darrel investigated. Before the Mayor and the Aldermen, Somers confessed that it had all been a fraud, and demonstrated the vomiting and convulsions on demand. Darrel, in the meantime, had replaced Somers with his sister, Mary Cooper, and continued the preaching and dispossessing.

The Commissioners for Ecclesiastical Causes called for an Investigation, and before it Katherine Wright confessed that Darrel had tutored her on how to speak in strange voices and simulate trances. Somers admitted that Darrel had begun coaching him in 1592, and had sent him to see Thomas Darling in Burton for instruction on dissembling. The judges, including the Archbishop of Canterbury, the Bishop of London and two Lord Chief Justices, weighed the evidence and decided that Darrel ‘was, by the full agreement of the whole court, condemned for a counterfeyte’. He was deposed from the Ministery, and condemned to prison. On the evidence of the Boy of Burton, a sixty-year-old Alice Goodridge had been condemned to death but had died in custody; Edmund Hartley had been executed at Lancaster. These ‘counterfytes’ were costing the lives of innocent people. The chaplain of the Bishop of London, Samuel Harsnett (later to become Archbishop of York), wrote a lengthy, closely argued book condemning Darrel, entitled A Discovery of the Fraudulent Practices of John Darrel, published in 1599.

Harsnett was keen to attack the practices on two fronts; the Catholic use of relics, exorcisms and the Latin liturgy had to be shown to be false, and the Puritans’ insistence on their primacy of Scripture as preached by them had also to be undermined. Harsnett rejected the ideas of possession by demons and the dangers of witchcraft as mere superstition and contrary to the teachings of the Church. These incidents made such an impression on the public at the time that Ben Jonson was able to reference them nearly twenty years on, in his play The Devil is an Ass (1616), which contains the lines: -

Did you ne'er read, sir, little Darrel's tricks
With the boy of Burton, and the seven in Lancashire,
Somers at Nottingham? All these do teach it.
And we’ll give out, sir, that your wife has bewitch'd you. 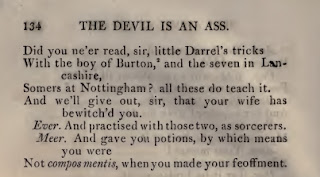