When mankind isn’t busy wiping out his fellow species, his fellow species are busy wiping out mankind. One of the strangest epidemics was the English Sweating Sickness, which may be responsible for causing one of the greatest sea changes in English social history. The first outbreak of the Sweating Sickness was in August 1485, and followed the invasion by the forces of Henry Tudor at Milford Haven. Henry sailed from France with a small army of retainers and French mercenaries, landed in Wales and quickly marched inland, gathering an estimated 5,000 more followers.

His forces met those of the Yorkist King Richard III at Bosworth Field on August 22nd 1485, and defeated and killed the King (the last English King to die in battle), and Henry was crowned as King Henry VII, the first Tudor monarch. This was effectively the end of the Wars of the Roses, with the Lancastrians triumphant, (although there was a final battle between Lancastrian and Yorkist forces at Stoke Field in 1487). The new King Henry moved quickly to London to establish his claim to the throne.

His army remained behind, and moved slower towards the capital. As they did, they were struck down by a strange new illness, which followed in their wake. A person would be fit and well, but was then taken by stomach cramps, headaches and lethargy, followed by a very great fever, with profuse sweating and internal heat. Subjects were usually dead within hours, and the mortality rate was said to be ninety-nine out of one hundred of those stricken. In September, the disease reached London, where it raged for a month, killing – in the words of the chroniclers – ‘infinite persons’, ‘a wonderful number’, ‘many thousands’.

People knew this was not the Plague or Black Death, nor was it a Pox, and those who recovered from it were not immune to a second or third attack, as an immunity did not occur in those who managed to recover. The physicians could do nothing; there was no cure or remedy. Some citizens fled to the country, hoping to escape, but the disease went with them, spreading it further afield. And then, at the end of September, it stopped, just as quickly as it had started. It continued in the provinces for a little while longer – The Chronicles of Croyland for November 1485 reports the death of the Abbot from the Sweating Sickness in less than eighteen hours, (and that Lord Stanley had used the Sweating Sickness as an excuse not to join Richard III at Bosworth).

What caused it was a mystery, some blame the French mercenaries who sailed with Henry, some blame the bad series of extremely rainy summers in the early 1480s, some thought ticks or lice to blame (although there was no evidence of bites or rashes on victims). Outbreaks of Plague pushed the Sweating Sickness out of popular memory – Plague killed over 30,000 in London alone in 1499.

In 1501, King Henry’s eldest son and heir, Prince Arthur, was married (at 15 years old), to the infanta Catherine, daughter of the Spanish monarchs Ferdinand of Aragon and Isabella of Castille.

In 1502, the teenaged newly-weds went to Ludlow Castle, where, on April 2nd Arthur died in mysterious circumstances, said to be of Sweating Sickness which had broken out again in the area. His younger brother, Henry, at ten years of age, became the new heir – it had been thought he would become a cleric, and maybe a future Archbishop of Canterbury – as it was, when his father died in 1509, he was crowned King Henry VIII. To maintain the alliance with Spain, arrangements were made for him to marry his brother’s widow, Catherine of Aragon, at, Henry claimed, the dying wish of his father.

They were married, in 1509, but Catherine did not produce Henry’s expected heir – she bore two stillborn babies and four more who died as babies. Henry believed the marriage was cursed by God – he had violated the Law in Leviticus 20:21 “And if a man take his brother's wife, it is an unclean thing: he hath uncovered his brother's nakedness: they shall be childless,” – and sought to have the marriage annulled. Pope Clement VII, who at the time just happened to be the prisoner of Emperor Charles V, (who, as it just happened, was Catherine’s nephew), refused Henry permission to annul the marriage without a decree from Rome.

Henry grew tired of waiting for this decree to arrive, so had one issued anyway, declared a split with Rome, placed himself at the Head of the Church of England, and married Anne Boleyn. If young Prince Arthur had not died from Sweating Sickness, it is unlikely any of this would have happened, and English history would have been entirely different.

In 1507, a second outbreak occurred in London but was far less virulent, and the lack of widespread mortality was put down to advancements in medical treatments.

The third outbreak of 1517 was incredibly violent – in some areas up to half the population died from Sweating Sickness, usually in between two or three hours of infection. The initial shivering was taken to be a symptom of the inevitable death to follow. The pestilence raged for six months, killing high and low born with indifference. The scholars at Oxford and Cambridge died in numbers enough that the English renaissance is said to have faltered. The King and his inner court moved around the country in a bid to avoid the disease. Outbreaks also occurred in Calais (then under English control), where only the fair skinned people succumbed to the ‘Englishe Sickness’. And again, as before, it vanished as quickly as it began.

For over a decade, it was not seen again, until the fourth outbreak in 1528. This visitation was even more terrible than that of eleven years earlier. In began in London in May, once more appearing from nowhere and without warning. Strong, healthy people were dead five hours later. This time it spread like wildfire, annihilating the populace. All public business was suspended, to no avail. And this time it did not limit itself only to the English – it ravaged Europe with an intensity that defies description.

An English ship was struck at sea - it docked at Hamburg and twenty-two hours later a thousand people lay dead. Sweating Sickness sped through the Baltic shores and by 1530 in some areas it had killed two-thirds of the population. Norway, Denmark and Sweden were struck – 400 people a day died in Copenhagen. Strangely, it seems not to have remained for longer than about a fortnight in any area, before spreading onward. Then it stopped altogether, and was not seen in mainland Europe again. 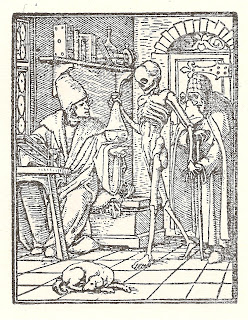 The fifth, and final, outbreak followed in England in 1551. Of all the instances, this was by far the worst. It began in Shrewsbury, on April 15th, and in days 960 people had died, some in less than an hour. Panic broke out and social order broke down. Clouds of poisonous mists were seen flowing along the banks of the Severn, and where they blew, the Sweating Sickness followed. Slowly it crossed the country, bring death and terror everywhere – one writer described it as a ‘depopulation’. People fled to Scotland, Ireland and France, where they died, although the disease did not affect their Scots, Irish or French hosts.

There is an invaluable eye-witness account made by John Caius, an eminent Elizabethan physician, called, “A Boke or Counseill Against the Disease Commonly Called the Sweate, or Sweatyng Sicknesse,” which tells us the disease: -

“But that immediately killed some in opening theire windowes, some in plaieng with children in their strete dores, some in one hour, many in two it destroyed, & at the longest, to the that merilye dined, it gaue a sorrowful Supper. As it founde them so it toke them, some in sleape some in wake, some in mirthe some in care, some fasting & some ful, some busy and some idle, and in one house sometyme three sometime fiue, sometyme seuen sometyme eyght, sometyme more some tyme all, of the whyche, if the haulfe in euerye Towne escaped, it was thoughte great fauour.”

Caius describes in detail the course of the illness – from an initial feeling of apprehension and a cold, often violent, shivering, followed by giddiness, nausea, aching in the limbs and great tiredness. This might last anything from half an hour to three hours and was followed by great sweating and internal heat, after which came palpitations, more pains, delirium, intense thirst and an irresistible desire to sleep. There were no eruptions of the skin or rashes, and if the patient survived twenty-four hours, they could be regarded as having survived. Most didn’t, and died within a matter of hours. Caius, (a latinised form of Keys), gave practical advice on treating the afflicted, including using sweet herbs to sweeten the air, a varied diet of fruits, and  ‘that two persones lye not in one bed.’

He contributed to the extension of his former college at Cambridge, where Gonville and Caius College is named for him, and went on to become Court Physician to Edward VI, Queen Elizabeth and Queen Mary, although he was stripped of this honour for being, incongruously, both a Catholic and an atheist at the same time. Caius was one of the early scientific pioneers who advocated empirical investigation rather a reliance on the authority of classical authors.

The Sweating Sickness subsided again as rapidly as it had arrived, and apart from odd, isolated incidents has never been seen again. Something that was feared more than the Black Death deserves to be more widely known. There has never been a full explanation of its causes, Caius’s description gives us our best guess at diagnosis, and the general opinion is that is was a strain of a pulmonary hantavirus, transmitted from human to human (rather than by rodent carriers). Maybe we will never know.