If Anne Redferne had felt any relief at the not guilty verdict delivered on the Tuesday evening, this was crushed the following morning, when she was tried for the murder of Christopher Nutter. The confessions of Demdike and James Device were read again, as was the evidence given by Margaret Crooke at Fence. If that evidence had been insufficient to convict her of the murder of Robert Nutter, it should not have been enough to convict her of the death of his father, but it wasn’t. She was found guilty.

The trial of Alice Nutter was strange. Unlike the others tried, she was a gentlewoman, a person of substance and education. In his Wonderfull Discoverie, Thomas Potts writes

“The two degrees of persons which chiefly practise Witch-craft, are such, as are in great miserie and pouertie, for such the Deuill allures to follow him, by promising great riches, and worldly commoditie; Others, though rich, yet burne in a desperate desire of Reuenge; Hee allures them by promises, to get their turne satisfied to their hearts contentment.”

This is lifted directly from King James’s Daemonologie, almost word for word, and he goes on to say,

“whether by the meanes of the rest of the Witches, or some vnfortunate occasion, shee was drawne to fall to this wicked course of life, I know not.”

The seventy year old widow was convicted on evidence regarding the events at Malkin Tower, but one explanation is that Alice Nutter was on her way to, or coming back from, Mass on Good Friday, and refused to defend herself as she may thereby have incriminated some of her fellow Catholics. A John Nutter, from Reedley Hollow in Pendle, was executed at Tyburn for being a Catholic priest in 1583, his brother John Nutter was executed for the same at Lancaster in 1600; a nephew, Ellis Nutter was ordained in 1601. Was Alice Nutter, a Catholic, a victim of the strictly Protestant Roger Nowell? Local legends still say this was the cause (we have long memories in these parts).

Katherine Hewitt’s and Alice Gray’s cases were the next. Katherine Hewitt (aka Mouldheels), was charged with the murder of Anne Foulds, a child, and for having ‘in hanck’ a child of Michael Hartley, that is, to be in the process of murdering the child by witchcraft. Potts does not include the testimony of Alice Gray, and although he lists her as being present at the Malkin Tower, he includes her name amongst those in his list of the Salmesbury witches. In any case, Alice Gray was the only one of the Pendle witches found not guilty. At mid-day on August 18th Anne Redferne, Alice Nutter and Katherine Hewitt were declared to be guilty.

In the afternoon, Jane Bulcock and her son, John, were brought in. They pleaded not guilty, and denied being at the Malkin Tower. Nine year old Jennet Device was re-called; she picked Jane out in an identity parade and identified John as the man who turned the spit as the stolen sheep was roasted.

Lastly, Alizon Device was tried. John Law, the pedlar, and his son, Abraham, gave evidence, and again Alizon broke down and begged forgiveness, which, again, was granted. Alizon spoke of her familiar, a black dog, as did John Law, although it had not been mentioned in the original complaint earlier in April. She said how she had wanted to buy pins from Law, Law said she had begged for pins, Abraham Law said she wanted to buy pins but had no money, so his father had given some to her. Still, on the strength of her confession, Alizon Device was found to be guilty, the same verdict being passed on the Bulcocks, (in a printing error in the Wonderfull Discoverie, to which the printer admitted, their verdict was shown as ‘Not Guilty’. This was corrected later).

“You shall all goe from hence to the Castle, from whence you came; from thence you shall bee carried to the place of Execution for this Countie: where your bodies shall bee hanged vntill you be dead; AND GOD HAVE MERCIE VPON YOVR SOVLES.” 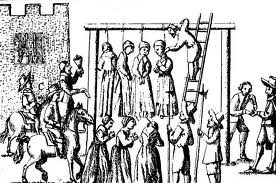 On Thursday August 20th 1612, the eight Pendle witches were hanged at Lancaster.