A Certain Spume or Froth

John Gerarde’s Great Herball (1597) contains all manner of interesting asides, which makes it fascinating reading. Right at the very end, Chapter 167 has one of the most curious of all the entries – that for the Goose Tree. Gerarde himself declares it to be ‘one of the marvels of our land (we may say of the world)’, and after his introduction, he is at great pains to confirm the veracity of what he is about to relate – ‘…what our eyes have seen, and hands have touched, we shall declare.’

He begins by the placing of the Goose Tree - ‘There is a small island in Lancashire called the Pile of Foulders.” This small island lies half a mile to the south of the Furness peninsula, and is known today as Piel Island. In medieval times it was called Fouldrey (also spelled Fowdray or Fowdrey), the name coming from the Norse fouder – meaning ‘fodder’, and ay or oy – meaning ‘island’. King Stephen gave the island to Savignac monks in 1127, who were later subsumed into the Cistercian order. The monks built a massive red sandstone fortification, the Pile of Fouldrey, now called Piel Castle. The landlord of the only pub on the island, The Ship Inn,  is called The King of Piel, and in the pub is a large oak chair. Anyone who sits in the chair, and buys a round of drinks for all present, is made a Knight of Piel, and can claim food and lodging if they become shipwrecked on Piel.

Anyway, back to Gerarde. He tells of many shipwrecks and driftwood washed ashore on the island, on which ‘… grows a certain spume or froth’, which in time grows into shells ‘like a muskel’, from which comes a mass, like finely woven silk. 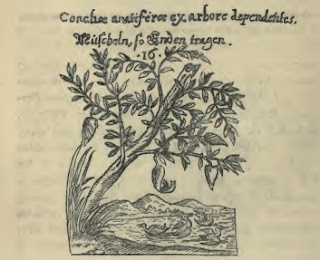 This mass continues to grow and assumes the shape of a bird, when, having reached a size, this falls from the shell and into the sea, where it then grows feathers and ‘… groweth to a foule, bigger then a mallard, and leffer than a goofe’, which has black legs and bill and is ‘… spotted in fuch maner as is our magge-pie’. 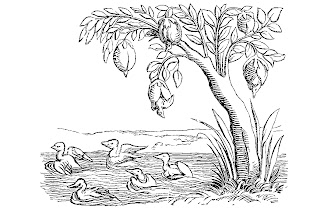 The people of Lancashire know the bird only by the name ‘Tree Goose’, and, says Gerarde, they make good eating – ‘one of the best is bought for three pence.’ He then repeats his claim to the truth of his story – “for the truth heeerof, if any doubt, may it pleafe them to repair unto me, and I fhall fatifie [satisfy] them by the teftimonie of good witneffes.”

On the shore between Dover and Romney, he goes on, he found an ‘…olde rotten tree’ on which were many red bladders from which grew small shells, white and a little like ‘a lympit’, which Gerarde took back with him to London and examined closely, finding in them living things in the shape of small, naked birds and some covered in soft down, ‘…which no doubt were the foules called Barnakles’. 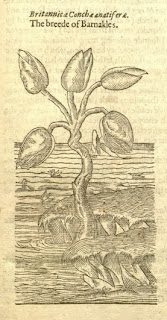 I’ve mentioned before (here) about Pope Gregory and his circumvention of Catholic dietary laws by declaring some foods to be marine species – hence the Barnacle Goose was permitted to be eaten during Lent or on Fridays as they are really shellfish, coming as they do from barnacles. And a bargain at three pence. 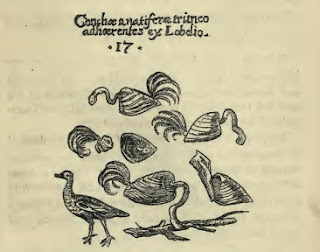 You can see from this last picture how such a story developed. The geese are migrants, so no one had seem them nest, nor their young, but they must have an origin somewhere. The goose-neck-like stalk of the barnacle, and the feather-like fronds could easily be mistaken for an embryonic goose. I've no idea what Gerarde was looking at in London, but I suspect it was a mollusc of some sort.

John Gerarde was also the first writer in English to describe the potato, which he called the Virginia Potato, to distinguish it from the red, sweet potato. Potatoes are, he writes,

‘… a food, as also a meat for pleasure, equal in goodness and wholesomeness unto the same, being either roasted in the embers, or boiled and eaten with oil, vinegar and pepper, or dressed any other way by the hand of some cunning in cookery.’