Brian O’Nolan was born on October 5th 1911, the fifth of twelve children, at Strabane, County Tyrone. He attended University College Dublin, where he was a distinguished student and prodigious writer, and took a job in the Irish Civil Service, where he rose to be secretary to various ministers. His salary allowed him to support ten of his siblings (after the death, in 1937, of his father). His brother Micheál recalled that Brian took a broken trellis from the family garden and built a table in his bedroom, on which he wrote his first novel, At Swim-Two-Birds, (a character in the book is called Dermot Trellis). 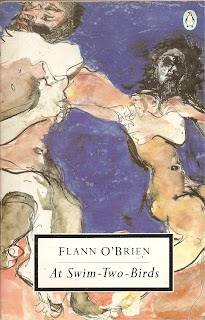 At Swim-Two-Birds was published under the pseudonym Flann O’Brien, to mixed reviews, in 1939. The title comes from the name of a ford on the river Shannon, Snámh dhá Én, which was visited by the legendary Mad King Sweeney (another character in the book, whose words come from the Old Irish epic Buile Suibhne – The Madness of Sweeney).

So Suibhne fared forth until he reached the church at Snámh dhá Én on the Shannon, which is now called Cluain Boirenn; he arrived there on a Friday, to speak precisely. Buile Suibhne para. 22.

It is said to be the last book that James Joyce, almost blind and using a magnifying glass, ever read. The book is by an author (Brian O’Nolan) writing a book under the name Flann O’Brien about an unnamed student, who is writing a book about Dermot Trellis, who is writing yet another book. The story has three openings; one about a pooka called MacPhellimey “a member of the devil class”, one about Mr John Furriskey “a depraved character”, and another about Finn Mac Coll “a legendary hero of old Ireland”. The stories and characters intertwine, and some of them, unhappy with their stories, conspire to write a book about Trellis, and have him tried, found guilty and tortured. The book did not sell well, and most of the copies in the publisher’s London warehouse were destroyed by a Luftwaffe bomb. The book was issued in New York in 1950, but sales remained low, although it is widely acclaimed by modern critics to be one of the most important novels of the twentieth century, and is on Time magazine’s list of the 100 best novels since 1923. 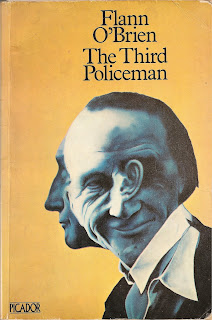 In 1940, Flann O’Brien submitted his second novel, The Third Policeman, to Longman’s publishers, but they refused it. O’Brien claimed to have lost the manuscript (in fact, he kept in on plain view on his dining table), and it was not published until after his death in 1966. If At Swim-Two-Birds is organised chaos, then The Third Policeman is chaotic chaos. An unnamed student studies the works of the philosopher and scientist de Selby, and writes a definitive study of him, which he cannot afford to have published. In a bid to get money, he is talked in to committing murder, and (without giving too much away), ends up at a police station, where he encounters two policemen, Sergeant Pluck and Policeman MacCruiskeen, who are entirely obsessed with bicycles. There are all sorts of adventures, the narrator is charged with murder but escapes, and eventually he arrives at a police station, where the desk sergeant asks him, “Is it about a bicycle?” and the whole thing starts over again. It is a very funny book, but, if read properly, also deeply disturbing, and is a masterpiece that really ought to be better known. 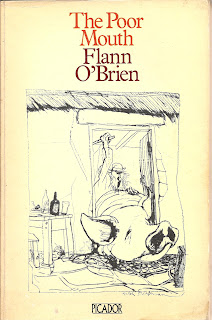 In 1941, under the pseudonym Miles Na gCopaleen, An Béal Bocht, a novel in Irish was published. An Béal Bocht is Gaelic for The Poor Mouth, and comes from the expression ‘to put on the poor mouth’ (an béal bocht a chur ort), the practice of exaggerating one’s poverty to elicit sympathy, money or acts of generosity. Set in Corca Dhorgha, (Corkadorkey), an area of extreme poverty and wetness, the novel parodies the Gaeltacht novels popular in Ireland. Dublin Gaeilgeoirí (lovers of the Irish language) visit the place but soon leave because the wetness is too wet, the poverty too poor and the Gaelicality too Gaelic; a German scholar is awarded a ‘fine academic degree’ for recording the finest Gaelic, when actually it came from ‘our rambling pig’. The novel was eventually published in English in 1973 – under the name of Flann O’Brien.

Myles Na gCopaleen (Myles of the ponies) comes from Myles-na-Coppaleen, a character in the 1860 play The Colleen Bawn by Dion Boucicault, and a variety of the name, Myles Na Gopaleen, was used by O’Nolan as his pseudonym for his column in the Irish Times called the Cruiskeen Lawn (from An crúiscín lán, "the full small-jug”, an anthem of the Irish Brigades abroad). Myles wrote the column from 1940 to 1966 (when he died), and it was very popular in Ireland. Sometimes in Gaelic, sometimes in English, the column covers all manner of subjects, and is by turns hilarious, thought provoking and downright manic. A collection from the column is found in The Best of Myles. 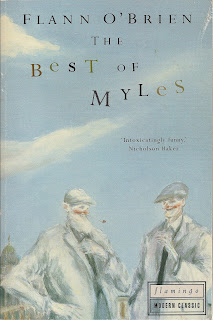 Other journalistic extracts from The Nationalist and Leinster Times, for which he wrote a column Bones of Contention for over twenty-five years under the name George Knowall, are collected in Myles Away from Dublin. 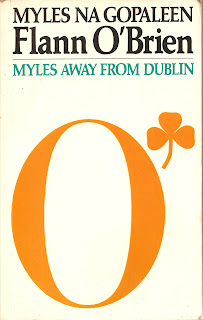 Myles was able to write, under the pseudonym, whilst still employed by the Civil Service, as civil servants were not allowed to write under their own names or express political opinions. His identity was an open secret, and sometimes other writers used the pen-name, but his deepening alcoholism and his frequent derogatory comments about politicians led to his enforced retirement in 1953. The journalism was poorly paid, the novels hardly sold, and he lived in a pretty poor state for years, until he died, aptly, on April Fools Day 1966. Another novel was published posthumously – The Hard Life, a satire on education, the rise of Irish industry and the Catholic Church. It is not, it must be said, in the same league as his other novels. The Dalkey Archive, published in 1964, reworks many of the themes of The Third Policeman, featuring de Selby, policemen and bicycles, although James Joyce and St Augustine put in appearances. It’s good, but I prefer The Third Policeman.

Consider this – the atoms from bicycles and the atoms of their riders can become mixed up as they ride about. The atoms become interchanged as the bicycle is ridden over rocky roads, and the personalities merge so much that some people are more bicycle than person and spend their days leaning against walls or propped against kerbstones, and some bicycles are more person than bicycle and spend their times leaning against dressers in warm kitchens when it is pouring outside, near enough to hear the family in conversation, and not a thousand miles from the eatables.

Do yourself a favour – read Brian O’Nolan’s books, whatever name they appear under.