William Bligh’s A Narrative of a Voyage to the South Sea (1792) is a first-hand version of the events from one of the leading protagonists. It is a fascinating read and offers valuable insights into Bligh’s thinking, character and motivations. He comes across very much as a man of his age – dedicated, professional and passionately devoted to his mission. Trained in the Royal Navy from the age of seven, he is not one to suffer fools gladly, and his frustrations when faced with lesser men are painfully evident, although his humanity, particularly his concern for the well-being of the sailors serving under him, is unmistakeable. He really seems to have wanted to avoid unnecessary hardships, particularly floggings and is genuinely upset when he has to resort to them.

The master of the Bounty, Fryer, forces the first flogging on him; on March 10th 1788 Bligh logged, “Untll this afternoon I had hopes I could have performed the Voyage without punishment to any One, but I found it necessary to punish Mathew Quintal with 2 dozen lashes for Insolence and Contempt.” Two dozen lashes is, by the standards of the time, a lenient sentence. Capt. Edward Edwards, of the Pandora, had two men flogged 250 times each. Captain Curtis of the Brunswick (the ship on which the three Bounty mutineers were eventually hanged) had men flogged for going ashore without permission; in the three-and-a-half weeks of the courts-martial, Curtis ordered 278 lashes to be administered – Bligh ordered 229 in the seventeen months of the voyage to the South Seas. Bligh, it seems, preferred to give miscreants a tongue-lashing rather than one from the end of a rope. (David Hannay, in Blackwood’s Magazine, April 1910, calls him a ‘nagger’ [p.501].) It seems, in the various re-telling of events that Bligh, Edwards and Curtis have become conflated.

Sir John Barrow (known to all as ‘Mr Barrow of the Admiralty’) published (anonymously, at first) The Eventful History of the Mutiny and Piratical Seizure of HMS Bounty in 1831. It is still in print today. Barrow uses Bligh’s Voyage as a primary source and adds further information about the voyage of the Pandora and the settlement on Pitcairn. He had access to the papers of the (by then) late Thomas Heywood and appears to be at pains to present Heywood in the best possible light, (tarring Bligh in the process).

An anonymous work Aleck appeared in 1855, telling the story again, but adding more information about John Adams (by then going by his birth name Alexander Smith) and his life on Pitcairn. It goes into great detail of the life of the islanders and their adherence to the Bible, (the title page describes the book as a ‘remarkable Illustration of the Influence of the Bible’), and in the conclusion of the book the blame for the mutiny is variously blamed on the drinking of ‘grog’ and intemperate language -

“Had Captain Bligh, instead of abusing his men, by calling them scoundrels and rascals, and threatening to make them jump overboard, used dignified language, and maintained his authority by such a deportment as would have commanded the respect of the crew, the mutiny would probably not have occurred.”

A poem of 1859, The Mutineers, by John McGilchrist M.D. brings more blame onto Bligh’s part in the proceedings. It is not, it must be said, the finest poetry ever to have been written. Here, (with apologies to those of delicate sensibilities), is Doctor McGilchrist’s assessment of Lieutenant Bligh –

His frown was dreaded by his brawny crew
More than the gathering of the huricane,
And his fierce wrath was their worst gale that blew;
They hated him and feared him to a man.
But, although stern and cruel, he was brave.
And skilled, when danger came, the ship to save;
Hence those who hated him despised him not:
His sailors were his slaves, his ship a "hell-afloat." [Verse 18]

Lady Diana Belcher published the Mutineers of the Bounty and their Descendants in Pitcairn and Norfolk Islands in 1870, and in her preface she praises Barrow’s book, but adds that it “… did not contain all the information which might have been afforded,” as she had access to other documents. This is hardly surprising as she was the stepdaughter of Thomas Heywood, and was also married to Sir Edward Belcher, who had, on HMS Blossom, visited Pitcairn in 1825. Diana was, like Barrow, keen to present her adoptive father as favourably as possible. It was to her misfortune that she was also married to Sir Edward Belcher, the most hated officer in the Royal Navy, of whom even the normally reserved Dictionary of National Biography says, “Perhaps no officer of equal ability has ever succeeded in inspiring so much personal dislike.” On Pitcairn, in 1825, Belcher had interviewed John Adams, the last of the Bounty survivors, and had learned from him that Heywood, then but a tattooed sixteen-year-old, had not been held against his will below decks during the mutiny, but had been on the gangway ‘… and might have gone [with Bligh] if he pleased’. Thomas Heywood, it seems, had perjured himself at his court-martial, and although convicted but later pardoned, other men of lower rank and standing than him had been hanged. Lady Belcher wrote in her account of the mutiny that “… Churchill said he ‘ … had kept Mr. Stewart and Mr. Heywood below, to prevent their going with Lieutenant Bligh in the launch,’”; her husband had been told otherwise. Part Two of her book tells how John Adams (aka Alexander Smith), had learned to read and write from Christian’s Bible and prayer book, and how, when the rest of the mutineers had been murdered, Adams had turned to Christianity and led the women and children into a life of Christian piety, and how the later missionaries had fared there.

The Mutineer – A Romance of Pitcairn Island, co-authored by Louis Becke and Walter Jeffery (1898), again finds Bligh to be at fault. He ‘flushes red’, he ‘sneers contemptuously’ and acts imperiously ‘as was his way’. It completes the picture of Bligh as martinet, harsh and uncaring, proud, stubborn and inflexible.

The first known cinematic version of the story was the joint Australian-New Zealand The Mutiny of the Bounty, a silent film directed by Raymond Longford in 1916 and now lost. The film was the costliest made in Australia up to that date, and attempts were made to be as historically accurate as possible.

In 1932, two former WWI pilots Charles Nordoff and James Hall co-authored the novel Mutiny on the Bounty, a fictitious first-person narrative based on the experiences of real-life mutineer Thomas Heywood, which presents Bligh as a cruel martinet and Christian as a square-jawed hero, more sinned against than sinner.

In 1933, came In the Wake of the Bounty, notable for being Errol Flynn’s screen debut (playing Fletcher Christian). It was director Charles Chauvel’s first talkie and, frankly, it shows. The film mixes dramatic scenes with documentary footage; the dialogue is stilted and awkward and the sets amateurish in the extreme. Bligh (Mayne Lynton) is a sneering, snuff-sniffing ‘swine’, liberally handing out lashings to his scurvy sea-dogs, whilst a Byronic Flynn smoulders aristocratically in the background. You can watch the film for yourself here : -
http://archive.org/details/InTheWakeOfTheBounty 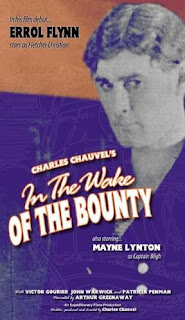 In 1935, Hollywood got its hands on the story. Based on the Nordoff/Hall novel, Mutiny on the Bounty starred Charles Laughton as Bligh and Clark Gable as Christian. Laughton mugs and croaks like a toad in a naval uniform, Gable smoulders Byronically in the foreground, and historical facts look on from the sidelines. Bligh has a dead man flogged (!) and another keelhauled (didn’t happen in the Royal Navy), men are shot dead in what was actually a bloodless mutiny, Christian miraculously becomes a father during the five months the Bounty spends loading breadfruit trees in Tahiti, and Bligh (not Capt. Edwards) commands the Pandora during the round-up of the mutineers. The film, somehow, won the Oscar for that year’s Best Picture. 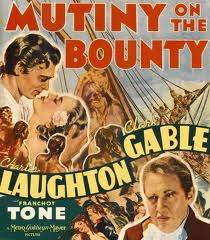 1962 gave Marlon Brando the opportunity to smoulder aristocratically in an imaginatively titled remake Mutiny on the Bounty. Unfortunately, he flounces about in Liberace’s cast-offs, and borrows an English accent from Dick van Dyke. Trevor Howard’s Bligh is an alumnus of The Captain Hook Naval Academy of Villainy, what with all his sneering, lashing, etc. etc. 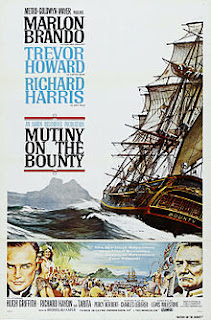 In 1984’s The Bounty, it’s Mel Gibson’s turn to smoulder, which he does aristocratically. Anthony Hopkins’ Bligh blusters and bawls but, amazingly, it sticks largely to the facts. Director Roger Donaldson does a good job, aided by an intelligent screenplay from Robert Bolt, and the leading actors present their characters as complex individuals, rather than the black and white caricatures of earlier versions. It’s not a bad film at all, in spite of the few faults that niggle the purist. 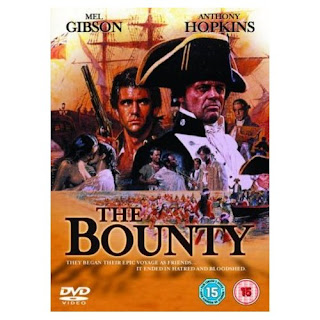 The Bounty by Caroline Alexander was published in 2003. Sub-titled The True Story of the Mutiny on the Bounty, this is maybe the best book on the subject written to date. It is intelligent, presents many facets from different angles, and, importantly, is very readable. If you only read one book about the Bounty, this is the one I’d recommend. It goes a great way to rehabilitating Bligh, not entirely faultless but neither entirely at fault, and gives us Christian as less Byronic hero and more moon-struck twenty-two-year-old, dazzled by dusky Tahitian beauties, and with a youthful pride all too easily wounded by Bligh’s acid tongue. 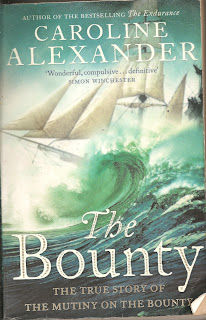 In September 2004, the trial began of seven Pitcairn men on 55 charges relating to sexual offences with young Pitcairn girls. Six were found guilty on 35 of the charges, and four were sentenced to between two to six years in prison. In 2005, another six men, living abroad, were tried on 41 charges in New Zealand.