How Pleasant to Know Mr Lear

It is probably safe to say that most people will have heard of Edward Lear, and even those that haven’t will almost certainly recognise the opening lines of his most famous poem:

The Owl and the Pussycat went to sea,
In a beautiful pea-green boat.

Lear is remembered today largely as a nonsense poet, creator of the Jumblies, the Yonghy-Bonghy-Bo, the Pobble Who Has No Toes, and numerous, humorous limericks (a form he helped to popularise).

His limericks seem a little forced to modern ears, as he repeated the phrase of the first line as a variation in the last line, and often ran lines together, giving a quatrain rather than the fives lines we are more used to. And they are quite innocent, whereas our limericks are often very rude indeed. But in his day, Lear’s limericks were extremely popular – John Ruskin placed the Book of Nonsense first on his list of favourite books. 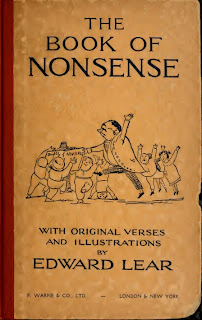 What is not as well remembered these days are his works as a serious artist. Born in 1812, the twentieth of twenty-one children, he experienced extreme poverty as a child, and was brought up by an elder sister. Whilst still a teenager, Lear began work on his illustrations of parrots, unusually for the time drawn from life, which were published in an edition of 175, as Illustrations of the Family of the Psittacidae, or Parrots in 1832, when Lear was still only twenty. The forty-two hand-coloured lithographs are of breathtaking quality, and secured Lear’s reputation as an ornithological illustrator, (a copy of the book, of which about a hundred remain, sold in 2004 for over £50,000).

Lear was a life-long invalid, he suffered greatly from epilepsy, his ‘demon’ (of which he was profoundly ashamed), bouts of depression, which he called ‘the Morbids’, (worsened by his guilt about the epilepsy), bronchitis and asthma. He found the air of the Mediterranean eased his condition, and travelled widely in the area, drawing, painting and writing about his travels. For a brief period in 1846, he was drawing master to Queen Victoria, but the English climate exacerbated his fragile health and he returned to his beloved Italy, where he eventually settled at San Remo. 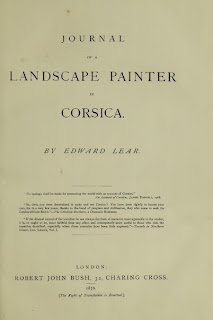 His Journal of a Landscape Painter (variously in Albania, Greece, Corsica and Calabria) are charming works, extremely interesting and beautifully illustrated, and an utterly delightful read, but for some strange reason largely ignored today. Lear’s sketches were often worked up into oil landscapes, often with intense colour contrasts and stunning atmospheric effects (with a hint of Holman Hunt), which he continued to exhibit throughout his lifetime and which stand in stark contrast to the simplistic, almost primitive, illustrations in the nonsense books. In his thirties his eyesight began to fail and he dedicated himself to the landscapes (unable to cope with the details of the biological illustrations), but at times he ground out these ‘tyrants’ thirty at a time merely to provide an income.

Lear was a prolific letter writer – up to twenty a day – and wrote forty fat diaries, and like all his writing they are delightful to read. He never married, but twice proposed to the same woman, who refused him twice, maybe because she was 46 years his junior. After a period of failing health, he died in 1888, at San Remo, and was buried there. In 1988 a memorial stone was flown from San Remo to Westminster Abbey, where Lear took his place in Poets’ Corner, near to his friend Tennyson and, with Lewis Carroll, the only other humourist to be so honoured. 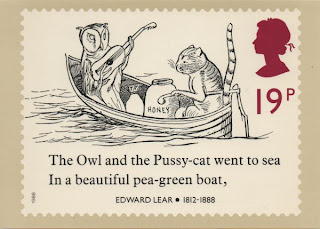 In 1988, a special set of stamps by the Royal Mail, and a commemorative exhibition at The Royal Academy of Arts, which issued this special mug and plate, marked the centenary of his death. 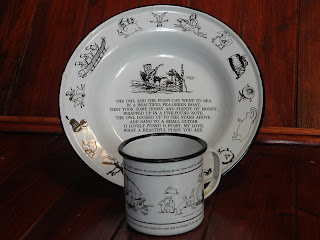 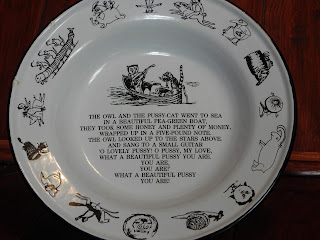 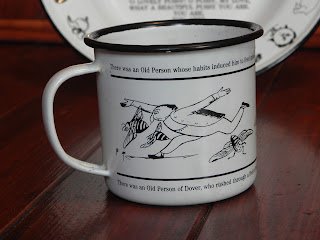 "How pleasant to know Mr.Lear!"
Who has written such volumes of stuff!
Some think him ill-tempered and queer,
But a few think him pleasant enough.

He reads, but he cannot speak, Spanish,
He cannot abide ginger beer:
Ere the days of his pilgrimage vanish,
How pleasant to know Mr. Lear!