The Questionable Quackery of the Dubious 'Doctors'


As in most instances, H L Mencken was absolutely spot on when he wrote,

“No one in this world, so far as I know—and I have researched the records for years, and employed agents to help me—has ever lost money by underestimating the intelligence of the great masses of the plain people.”

And in no sphere is this as true as in that of medicine. The readiness of Mencken’s ‘plain people’ to believe in any humbug or quackery put before them is so eager it seems to amount to wilful contrariness. There is nothing, it appears, in which they will not put their trust, regardless of how ridiculous, improbable or down right impossible it is. Indeed, the more outlandish it is, the more faith (and money) they seem to invest in it.

In 1771, Luigi Galvani discovered that if electricity was passed through the sciatic nerve of a dead frog, its legs would twitch. Galvani coined the term ‘animal electricity’, and pretty soon there was burgeoning business in ‘electric’ medicine. For instance, for the sum of $2.50 one could purchase one of Addison’s Galvanic Electric Belts, made from scarlet and yellow cotton, with copper and zinc pieces sewn in and separated by blotting paper, which arrived in its own box and with an accompanying ‘lecture’ extolling the virtues of electricity,

What it didn’t tell its buyers was that these belts could be bought from the manufacturers, the Electric Appliance Company, for $1.10 per dozen. Quite a tidy profit.

If you prefer not to wear a belt, then might I interest you in the Oxybon, a device that will cure all your ills by introducing oxygen directly into your body? It comes courtesy of Dr G W Filloon, who bought his medical diploma from The Metropolitan Medical College, Chicago in 1899, (where anyone with the money could buy just such a ‘qualification’). The Oxybon is placed in cold water and the handles are gripped, and nothing happens. All for a rental price of $5.00 a month.

If none of this appeals, how about the ‘Blue Light’ theory put forward by the Civil War General, Augustus James Pleasonton, in his book The Influence Of The Blue Ray Of The Sunlight And Of The Blue Colour Of The Sky (1876) – printed, thoughtfully, on blue-coloured paper. Thousands of people spent thousands of hours sitting beneath panes of blue glass in the vain hope of curing their various ills. Quite a few farmers bought blue glass panes and installed them in their greenhouses, in the hope that the blue light would increase crop production.

Pleasonton’s book is a marvel of non sequiturs, speculations and outright barminess; he rambles about magnetism, geology, biology, the Bible and the virtues of temperance. The pairs of legs of quadrupeds are, we are reliably told, horseshoe magnets that draw power from the rotating iron magnet in the centre of the Earth. Plants grow better in Spring because the sky is bluer than it is in Winter. Whales need to mate for three-quarters of an hour in order to build up sufficient ‘electricity, magnetism and heat’ to fertilize the ovum. This all comes from the mind of a man who was placed in charge of 10,000 infantrymen at the defence of Philadelphia!

The crown as the Ananias of Quackdom however sits firmly on the head of Dr G W Curry of Lebanon, Ohio. This ‘physician’ claimed not only to have discovered the ‘germ’ responsible for cancer, but had also found the sure cure, claiming that he could heal even the worst cases in twenty days and that, “To use other treatment simply invites death.” Curry offered numerous testimonials from prominent local citizens, including the county treasurer, the Sheriff, the recorder, the auditor, a judge, two attorneys, and two bankers. He also made a number of claims to various medical positions in a variety of organisations, which were either shown later to be imaginative or down right fraudulent.

He inserted advertisements in newspapers offering to cure cancers of any sort in a matter of days. Should you have replied to Curry’s advert, you would receive a letter and questionnaire in return. If this was not sent back, follow up letters would be sent, highlighting the danger of delaying, and promising to remove ‘every fiber, filament and tendril’ of the cancer, with no risk of it returning. If you parted with your $25, you would receive Dr Curry’s Red Ointment, a compound of assorted chemicals, antiseptics, narcotics and caustics. When the authorities got round to investigating this miracle worker, it was found that the Red Ointment was mildly caustic, and that “… the claims, representations and promises employed in promoting this treatment are false and deceptive.”

A fraud order was issued against ‘Dr’ Curry when it was found that his diagnoses of cancers were most often harmless sores, on which the Red Ointment had little effect but which healed normally, for which Curry then took the credit. Unfortunately, in the cases of true cancer, his fraud would have diverted the sufferer from seeking real medical treatment, offered false hope to the dying, and ultimately contributed to a painful death. For $25 a pop. 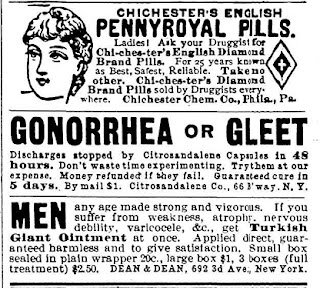 Such quackery and humbug surrounds us still. Alternative medicine that actually works has a name – it is called ‘medicine’. But there are sharks, con-men and criminals enough out there to part the credulous from their money, offer false hope to the gullible and lie to the ignorant. And there are the ‘deceived deceivers’, those who have been taken in by quackery without knowing it, and then pass it off and endorse it as of real value.

Let’s be clear about this. You can’t cure yourself by sitting in a pyramid. Crystals do not have ‘energy’ which can heal you. Chromotherapy is not chemotherary. Water does not have a ‘memory’. ‘It just works’ is not a valid argument. There are no fairies at the bottom of the garden. And if you don’t get your kids vaccinated, you deserve to have them taken away from you and placed into the care of proper grown-ups, because you are risking their lives, and the lives of other people’s children, for a ‘theory’ that you do not understand.