The Latter-Day Legends of the Devilish Dogs


As previously mentioned here, we don’t really have a tradition of were-wolf stories in Britain, probably because wolves were thought to have been exterminated in the Middle Ages. There is a legend that the last one was killed at Humphrey Head, Lancashire in about 1390, but bounties were paid, and other records exist of wolves being killed, into the late fifteenth century.

Joseph Strutt, in his The sports and pastimes of the people of England from the earliest period, including the rural and domestic recreations, May games, mummeries, pageants, processions and pompous spectacles (1801), writes that they were probably exterminated, or at least exceedingly rare,  by the reign of Henry VII (1457-1509) and that

“The Lancashire forests of Blackburnshire and Bowland, the wilder parts of the Derbyshire Peak, and the wolds of Yorkshire were among the last retreats of the wolf.”

But what we lack in wolf tales we more than make up for with those of strange dogs.

I have written about the Gabriel Ratchets here, and touched lightly on the Lancashire Boggart there, but there is more to tell. Boggart, or Boggard, comes from the same root as Bogey, Bogle and Buggan, all names for sprites, imps or goblins, more often than not malevolent. The form taken by the boggart varies, sometimes it appears almost like a small human or gnome but people seldom see them, although they often spook cattle, horses and other livestock. Sometimes they live in houses, usually in the eaves, or barns, and sometimes out in the country – there is a Boggart Hole Clough about 5 miles north east of Manchester (a Clough is a steep sided, wooded valley by a stream.

In Yorkshire, North East Lancs and the Lakes, it is called a Gill or Ghyll). A boggart haunted Townley Hall, Burnley and claimed a member of the Townley family every seven years, in punishment for the harm done to the poor of the district by a Sir John Townley, who enclosed, or ‘lay-in’, some common land into his estates. The ghost of Sir John can be heard lamenting,

Another common tale is that of the Boggart Flitting (to flit, in Lancashire, is to move house). A family, in desparation at their boggart’s pranks, packed their belongings on a wagon and prepared to flit, when they heard the boggart cry, “Owd on. I’m comin’ too!” so, realising there was no escape, they abandoned the plan, unpacked the cart and moved back in again. A common Lancashire response, when someone says, “I’m coming too,” is to reply, “Aye, Like t’Clegg Ho’ boggart.” 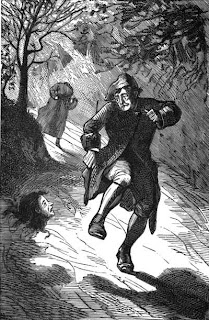 Sometimes, the boggart is a headless woman, whose head chases unfortunate travellers (one of these haunts the lanes around Longridge).

Two poachers, out rabbiting one night around Houghton Tower, were returning home in the dawn light when a voice was heard coming from the sack that one was carrying, “Where are ta, Lad?” The reply came from the other’s sack, “In a sack, on a back, goin’ up Houghton Brow.” The poachers had caught boggarts not rabbits. They dropped the sacks and fled.

But boggarts can appear as dogs, usually black dogs with glowing red eyes. These haunt the moors, the tops and the fells, where they prey on unwitting travellers. There is one of these on Pendle, a great Devil Dog as big as a sheep, which roams the slopes and cloughs looking for victims. This is the boggart that spoke to Alizon Devize and offered to lame John Law, the Halifax peddler, and also spoke to her brother, John, asking him for his soul. Another black dog haunts Cliviger Gorge, a terrible, shaggy beast with large paws and eyes like saucers, when he walks it sounds like splashing water, and he is called ‘Trash’, but sometimes he wails, and is called ‘Skriker,’ and whoever hears his ‘skriking’ will surely die soon.

In Yorkshire, between Skipton and Harrogate on the moors and near to Washburn water, are the ruins of Dobb Park Lodge, once a grand four-storey Tudor mansion but now uninhabitable. Below the house was a dungeon, from which unearthly noises were heard to issue, but no one dared approach until one day a local, his resolve strengthened by a good draught of ardent spirits, took a lantern and descended into the darkness. After following the twists and turns of a subterranean tunnel, he came at last to a vast hall, almost as large as a church, where the finest music he had ever heard was playing, with a great fire burning in the grate, before which he saw an enormous black dog. To his amazement, the dog began to speak in a human voice, saying that if he meant to leave the place alive, he must do one of three things;

“You must either drink all the liquor there is in that glass; open that chest; or draw that sword.”

He looked at the chest, which seemed too large to move, and he looked at the sword, which was almost as big as himself, and then he looked at the glass, sparkling and fine, with a long stem. He took this up and started to drink, but the liquid was scalding hot and burned his lips and tongue. Fearing it would scald away his insides, he spat it out and dashed the glass down, whereupon the lid of the chest flew open and in it he could see many thousand pounds in gold, and the sword was drawn by an unseen hand and hovered before him. Suddenly, the fire and his lantern went out, the music ceased, and a terrible screeching and wailing filled the darkness. Terrified, he passed out and awoke in pitch-black silence. He picked his way back along the tunnel and eventually made his way back out into the sunlight. No one has dared to go into that dungeon since, and for all I know, there is still a chest of gold down there.