The Astonishing Accomplishments of the Polymath Parson


There was once a breed of Englishman, now almost extinct, that leaves you astonished by its accomplishments  - the country clergyman. Why it should be that this particular profession should produce so many polymaths is a mystery, but we can, perhaps, get some sort of an answer by a cursory look at the works of Anthony Trollope (not exactly a slouch himself). The first of his Barsetshire Chronicles, The Warden, gives us a portrait of a clergyman, Mr Septimus Harding, who enjoys a good living and income from his wardenship of Hiram’s Almshouse, a position that has few onerous duties and leaves Mr Harding with plenty of time for his musical pursuits.

In the next novel of the series, Barchester Towers, we meet other clergymen with goodly incomes and light duties; one, a prebendary called Dr Vesey Stanhope has spent twelve years in Italy recovering from a sore throat, where he spends his time catching butterflies. Another, Rev. Francis Arabin, is a former Oxford University Fellow, whose Deanship of the Cathedral brings with it a beautiful house in the Close and a garden of 15 acres. Yet another, Mr Quiverful, is the father of fourteen children. These would all have been instantly recognizable types to Trollope’s readers and are no mere caricatures, for we have real Victorian clergymen who spent their time doing far more interesting things than simple clergying.

One such was the Reverend Sabine Baring Baring-Gould MA, whom I mentioned almost in passing yesterday, as the author of The Book of Were-wolves. Born in 1834, Baring-Gould was named for his astonishingly accomplished uncle, Edward Sabine, and was a sickly child who spent much of his infancy touring Europe with his father and was taught by a succession of private tutors. He went up to Cambridge in 1852, took a BA and an MA, and became a curate at St John’s Church, Horbury Bridge, West Yorkshire in 1864. He was popular with the Sunday School pupils, to whom he would tell stories, and in 1865, he wrote the hymn for which he is best remembered, ‘Onward, Christian Soldiers.’ 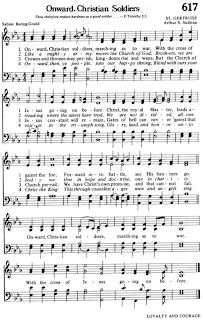 He said later that he had written the hymn in fifteen minutes and was not satisfied with some ‘faulty’ lines, but when Sir Arthur Sullivan (of Gilbert and Sullivan) added the now familiar tune (St Gertrude) in 1871 it became one of the most popular hymns of all. In about 1866, he met Grace Taylor, who had left school at ten to work in a mill, lived in poverty with her mill-worker family, dressed in clogs and shawl, spoke with a broad Yorkshire accent – and she was fourteen.

Baring-Gould’s bishop arranged for Grace to go to stay with his relatives in York, where she was taught etiquette and elocution, and the manners of an educated lady. Two years later, she returned home and, at the end of a service at Wakefield, Grace became Mrs Baring-Gould. She was by then sixteen, he was thirty-four, and neither family was overly impressed by the marriage, predicting the very worst would surely follow.

They moved first to Essex, and then in 1880, to Lewtrenchard, Devon, when he had inherited the family estate of 3,000 acres, and where, when the living became vacant in 1881, he appointed himself to the post, becoming both the Parson and the Squire, and where the former mill girl now had a staff of thirty servants.

Baring-Gould did not like the bishops and they did not like him, he wasn’t fond of other vicars or meetings with them, he was a High Church Anglican when it was not popular, and although he was intensely religious and people enjoyed hearing him preach, he imposed a ten-minute limit on his sermons and if any of his curates exceeded his ten-minute rule in their sermons, he would throw hymn books at them until they stopped.

He was absent minded – he once bought forty pounds of meat from an itinerant butcher whilst distracted, and had to throw a grand dinner to get rid of it all – and he didn’t care what anyone thought about him, anyone that is but Grace, who saved him from many a potential situation; she would hold onto his often angry, spontaneous letters until the following day, when he had calmed down and thought better of sending them.

What he did enjoy was working, particularly writing, which he did whilst standing up, and over his lifetime he wrote over 1,200 publications – more than any other author in the collection of the British Library, some of which have yet to be published. He wrote about anything – a sixteen volume series on the Lives of the Saints, travel books, geology books, geography books, language books, folklore books, books about folk music, books about customs, books about myths and books about books. He wrote hymns, he wrote songs, he wrote poems, he wrote novels, but he considered his best work to be his collections of folk songs, on which he collaborated with the legendary Cecil Sharp and which have preserved many songs that otherwise might have been lost forever.

He was an antiquarian, a historian, a geologist, a palaeontologist, an archaeologist, an anthropologist, a hagiographer, a travel writer, a folklorist, a philosopher, a naturalist, and a practical joker. He entered fictitious works into his bibliographies purely for the devilment of it, he put rubber bulbs and tubes under his tablecloth and if he thought a dinner guest had drunk too much, he would make their plate wobble by inflating the bulbs, and when the Great War broke out, he faked ‘call-up’ papers for step-mother’s elderly and plump pony, much to the old lady’s consternation.

With an almost deliberate contrariness, Sabine and Grace had a very happy marriage, which must have upset their family expectations greatly, and had a total of fifteen children, all but one of whom grew to adulthood. Grace died in 1916, after forty-eight years of marriage – Sabine had the words Dimidium Animae Meae (‘Half my Soul’) inscribed on her tombstone.

He died in 1924, just a few days short of his ninetieth birthday, (possibly of old age). I keep repeating this, but if you have time to spare, seek out some of his books and enjoy reading them. It is a far better option than some of the other things you might be tempted to do.