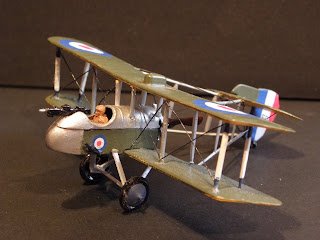 This is an Airco D H 2.  It was designed by Airco’s chief designer, Geoffrey de Havilland, and the planes he designed for them bear his initials. The D H 2 was a single-seat aircraft, based on the earlier two-seater D H 1. At the outbreak of the First World War, aircraft were not regarded as weapons  - they were used for reconnaissance and spotting for artillery. Inevitably, Allied and German aircrews came into conflict, with navigators taking pot shots at each other with pistols, or even throwing tools out of the cockpit at the enemy. The problem with forward-firing guns was the danger of hitting one’s own aircraft – particularly the propeller. 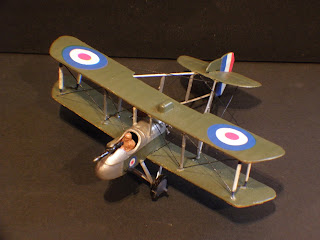 The Dutchman, Anthony Fokker (Stop sniggering at the back), designed a synchronization mechanism (erroneously known as interrupter gearing), which allowed a machine gun to fire through the arc of the propeller without hitting the blades. This invention was mounted on German aircraft, giving them an enormous advantage in aerial warfare, as a pilot in a single-seater aircraft could aim the entire plane at his target, rather than having to aim a gun whilst also flying in a different direction. In July 1915, the so-called Fokker Scourge began (You Boy, I’ve warned you). 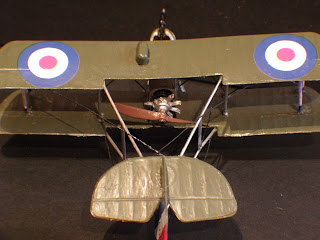 German air superiority was very demoralising for the Allies. However, it was short lived, for two reasons. The Germans only issued the eindeckers (monoplanes) fitted with the synchronised guns in ones and twos to existing reconnaissance units (in contrast, the British had organised fighter squadrons), and although the Allies lacked synchroniser technology, they had an alternative solution already in production. 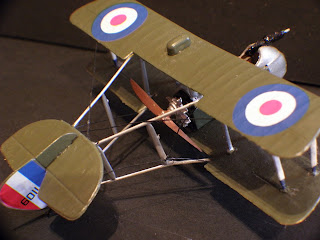 The D H 2 (and F E 2b) were ‘pusher’ aircraft. The propeller was mounted at the rear of the fuselage nacelle, pushing the plane through the air, and thus eliminating the need for firing through the propeller, whilst enabling the pilot to ‘aim’ his aircraft. As a bi-plane, the D H 2 also had a greater wing area, making it very manoeuvrable in the air. Allied planes ceased to be Fokker Fodder (Look, just grow up), and the Allies gained the upper hand.

Lanoe George Hawker was the first Allied Air Ace of the First World War. In April 1915, he won a DSO (Distinguished Service Order) for an attack with hand grenades on a German zeppelin shed. In July 1915, he attacked, and shot down, three German aircraft in a single action, for which he was awarded the VC (Victoria Cross). Hawker was also an innovator, and introduced many improvements to the Royal Flying Corps, including instructing fellow pilots how to combat the D H 2’s propensity for spin and stalling. Hawker’s philosophy of combat was simply ‘Attack Everything’.

Hawker was flying a D H 2 in November 1916, when Germans flying the new, faster, more heavily armed Albatrosses engaged his patrol. Amongst them was Lt Manfred von Richthofen - the Red Baron. Hawker and von Richthofen became involved in a dog-fight until Hawker began to run low on fuel. He broke off and made for Allied lines, but von Richthofen pursued him. Hawker was a mere fifty yards from safety, when the German’s guns jammed.  Unfortunately a single bullet from the final burst took him in the back of the head, killing him instantly, and making him the Red Baron’s 11th fatality.