Due to mix-ups in the drawing up of family trees, and not helped by individuals in families being given the same name, historians have confused and conflated two men, both called Laurence Nowell, from Read Hall in Lancashire. This confusion was not helped when the Dictionary of National Biography had only one entry for Laurence Nowell, which included details of the lives of the two Laurences. Alexander Nowell of Read Hall married Grace Catherall from Mitton, and they had four sons: John, Laurence, Charles and Thomas. The eldest, John, inherited Read Hall when Alexander died, and he had a son, Roger, from his first marriage, and when he remarried after his wife died, he had four more sons and four daughters.

Of these four sons, the second was called Laurence, and he went on to be a clergyman and Dean of Lichfield. His uncle Laurence (who was not his cousin, as some have written), was a historian, who revived interest in the Anglo-Saxon language and collected original manuscripts written in that language. One of these, known as the Nowell Codex, contains the only known original manuscript of the Old English poem, Beowulf (the manuscript, later acquired by Sir Robert Cotton, is now in the British Museum, where it is catalogued as Cotton Vitellius A xv – Cotton had classical busts on top of his library shelves, and this manuscript was the fifteenth book on the first shelf with the bust of the Roman Emperor Vitellius over it).

The manuscript was damaged in a fire in the library on the night of October 23rd 1731, when the edges of the pages were badly scorched and the book was damaged when it was thrown out of a window to save it from the flames, and further damage occurred as the untreated pages crumbled over time. There was a transcript made in 1787, on the order of Icelandic-Danish historian Grímur Jónsson Thorkelín, who also made another copy and it is from these we can partially reconstruct the lost sections of the damaged pages. 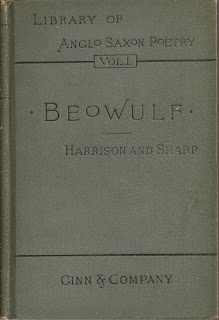 This is where my interest started - I bought the 1894 edition of this Harrison and Sharp translation in 1972 for 35p.

In 1879, after becoming Professor of Anglo-Saxon at Cambridge University, W W Skeat proposed that the manuscript should be autotyped (a type of photographic process) by the Early English Text Society, and the subsequent book, edited by Professor Julius Zupitza, was published in 1882. Zupitza used Thorkelin’s copy for his own transcription of the text. The earliest translation appeared in 1805, when Sharon Turner published his selection of verses, with other writers issuing translations of selections over the years; Thorkelín published a translation into Latin in 1825 – to very poor reviews, and an English translation into prose by John Kemble in 1837.

One of the best is that by Nobel laureate ‘Famous’ Shamus Heaney (1999), which introduces Northern Irish turns of phrase into the poem, whilst retaining the overall feel of the poem. If you only ever read one version of Beowulf, this is the one I’d recommend.
The original Beowulf was written in about 1000 CE, although there is dispute among academics about the date, as there is about the poem itself. Some think it may be a transcription of an oral poem, written from several performances by a scribe, while some think it is an original work written by a poet or poets – there are two distinct hands in the text. It was written in England, in Old English, but describes events in Scandinavia, in Denmark and Geatland (now southern Sweden).

The poem opens with the word Hwæt – which is variously translated as Listen, Attend or Lo! Some linguists, the eminent David Crystal among them, cite this as an example of the word ‘What’ being used as a greeting – most famously in the ‘What ho!’ of Bertie Wooster in the Jeeves and Wooster stories by P G Wodehouse.