The Sensational Scandal of the Flying Fat-Lady 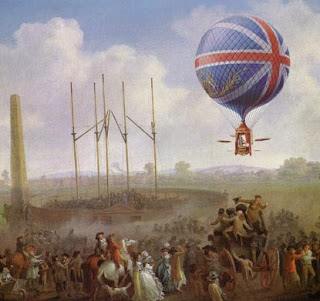 Drunken Scotsmen were not the only ones to take an interest in aeronautical matters in 1784 – egotistical Italians were also up for the challenge too.

Vincenzo Lunardi – The Daredevil Aeronaut – was secretary to Prince Caramanico, the Neapolitan Ambassador to London, and took to the air in a hydrogen balloon on September 15th of that year at the Artillery Grounds, London before a vast crowd of 200,000 that included, amongst other luminaries, the Prince of Wales.

The crowd began to grow impatient, so Lunardi, a dog, a cat and a pigeon, ascended with a partially inflated balloon over the fields and began to drift northwards in the breeze towards Hertfordshire. Stopping briefly to release the dog and the airsick cat at Welham Green, at a place still called Balloon Corner, Lunardi continued on to Standon Green End, covering a total of twenty-four miles in two and a half hours and instantly turning him into a celebrity. The ballooning craze inspired the fashions of the day, and Lunardi skirts and bonnets became all the rage.

The next flight was not until June 29th 1785, when Lunardi, his friend the wealthy Old Etonian Thomas Biggin, a Colonel Hastings and Mrs Letitia Sage met at St George’s Fields, on the south bank of the Thames, where ‘very safe’ seats were sold at 2/6d and ‘very best’ seats at 3/6d.

The original plan had been for all four to ascend in the balloon but Lunardi had not reckoned on the Junoesque Mrs Sage. Letitia Ann Sage (nee Robinson) was an actress and dresser at Drury Lane theatre, who was married to a Cheapside haberdasher, and who weighed in at an impressive 200 lbs.

She hadn’t thought to mention this to Lunardi, and the gallant Lunardi hadn’t thought to ask about her weight, but he and Colonel Hastings gave up their intentions to fly that day, and Mrs Sage and Mr Biggin climbed into the gondola together.

Thrown by this new arrangement, Lunardi failed to lace up the door properly and as the balloon slowly rose into the air the crowd’s last sight was of Mrs Sage on all-fours attempting to re-lace the door.

Now, in a bid to reduce wind resistance, Mrs Sage had thoughtfully dressed in a low-cut silk dress that day, and so at the sight of her, all décolletage and on her hands and knees, the crowd put two and two together and assumed that she had ‘fainted’ and Mr Biggin was administrating his own improvisational aerial ‘first aid’.

Unaware of the innuendoes that circulated below them, Mr Biggin and Mrs Sage tucked in to a picnic of cold chicken and Italian wines until the balloon descended into field at Harrow, cutting a rut through the hay crop. The farmer, outraged by the ruination of his harvest, approached Biggin with violence in mind, but he and Mrs Sage were saved by a gang of Harrow schoolboys, who had seen the flight of the balloon and followed its progress. They had a whip-round to pay off the angry farmer and carried Mrs Sage on their shoulders to a nearby pub. She was the first female aviatrix in England (and maybe, one of the first members of the Mile High Club - Mr Biggin being the other).

The balloon was displayed at the Pantheon (admittance 5/-), with Mrs Sage in attendance to answer questions, and as interest waned, she published a letter about the flight, on sale for 1/-. In October 1785, Lunardi took his balloons to Scotland, where he met Tytler, and made a total of five flights, the last of which almost ended in disaster when he crashed into the North Sea off Berwick and had to be rescued by a fishing boat. Again, he made money by exhibiting the inflated balloon (admittance 1/-), in the choir of St Mungo’s, Glasgow.

What was to have been his twelfth flight was scheduled for September 20th 1786, at Newcastle on Tyne, but things ended in disaster when Lunardi was pouring the sulphuric acid into the apparatus that produced the hydrogen gas. The strong effervescence caused some of the acid to spill out of two points at the bottom of the apparatus, and several of the men holding the ropes that tethered the balloon panicked and ran. The partly filled balloon rose sharply into the air, taking with it a Mr Ralph Heron, the twenty-two son of the Under-Sheriff of Northumberland, whose hand was twisted in a rope attached to the crown of the inflatable. When the balloon was ‘elevated about the height of St Paul’s cupola’ it suddenly inverted and the crown separated from it; Heron fell to the earth, landing on some soft ground, where he spoke to his parents and the attending doctors before dying from internal injuries an hour and a half later.

Lunardi issued a broadside, lamenting the death but pointing out that the tragedy could have been avoided if all the gentlemen had held onto their ropes, but the damage had been done. The Daredevil Aeronaut was driven from the shores of Britain in a hail of criticism, but continued his ballooning exploits in Portugal, Spain and Italy, where he made an ascent of Mount Vesuvius in September 1789. He died in 1806.

Once again, the final word goes to Robert Burns, who mentions a Lunardi hat in his poem To A Louse : - On Seeing One On A Lady’s Bonnet At Church (1786)

I wad na been surpris'd to spy
You on an auld wife's flainen toy;
Or aiblins some bit duddie boy,
On 's wyliecoat;
But Miss's fine Lunardi! fye !
How daur ye do ‘t?